The Film Nerd in me has always been jealous of DP's who get to shoot with pre-release cameras and post their experiences for the rest of us to analyze, critique & drool over. A couple weeks ago, I got to join those enviable DP's when Panasonic saw fit to give me the Varicam LT for a night. Panasonic was interested in adding to their library of footage shot at 5000 ISO and I was eager to test the lowlight capabilities of this camera.

There are other blogs that intelligently discuss this camera's place in the market, so I won't rehash those discussions. Instead, I will tell you bit about my experience with it.

On the night I received the camera, my usual nerdy cohorts were busy with various Life-tasks. Unfortunately, this meant that the crew was made up entirely of me and my beard. Luckily my talented actor friend Chris Mollica was willing to run around the streets of Los Feliz while I followed. I wore a backpack with a set of Rokinon Cine lenses (14mm, 24mm, 35mm, 50mm, 85mm) and that was it- no room for sticks. The Varicam had the shoulder rig mounted on it already, so off we went.

I see tremendous value in camera tests, but there are more qualified technicians to shoot that. Chris and I made something a bit more playful (and hopefully still useful).

Functionality
I could not have been more impressed with my "on-set" experience with this camera. I do not consider myself a particularly savvy camera tech. When I can, I rely on my AC's to change codecs, frame speeds, 4k to 2k, etc. I am perfectly capable of doing this myself, but often I prefer to shift my attention to lighting adjustments and trust my camera team to get us set up. Bottom line, I consider myself slow when it comes to making camera changes. Not only did I not have any trouble making adjustments, I actually kind of liked it. I think I have a serious crush on that control panel. 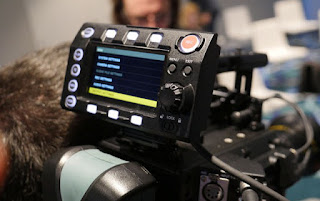 It was tremendously intuitive and simple to navigate. I switched from one 4K codec to another (which was needed to shoot at 60 frames). I then navigated easily to 1080 so I could shoot in 120fps (Adobe Premiere doesn't yet support the slow motion codecs from this cam. If anyone has a tip on how to transcode it, I'd be happy to do so and cut it back into the video.). Being able to detach the control panel and adjust it freely was amazing. I had the camera on my shoulder and simply looked up to make my changes. I didn't need to put the camera down or stop anything that I was doing. I also had no idea that the control panel doubles as a monitor! I somehow missed that with all the write-ups and, needless to say, when I discovered that I could use it as a basic monitor, my crush grew in intensity. Absolutely wonderful design.

I have shot a lot of handheld footage in my day and camera balance is always a trick... except with the Varicam LT, apparently. I threw it on my shoulder, then forgot it it was there and went to work. Chris and I were moving at such a pace that I didn't realize how well balanced the camera was until I got home at 3:30am and lacked any soreness whatsoever. I had barely noticed the camera during production, which is a very good sign. I also carried it from place to place by the top handle with ease. Again, just really great design.

While on the topic of design, I will briefly add that Panasonic’s AU-VCVF10G viewfinder is pricey and I know why- because it is freaking excellent. I wish I had experience with the Zacuto Gratical so I could compare the two, but I haven't yet had the pleasure. I can tell you, though- this viewfinder is a great. Focus peaking is pretty damned good and it felt significantly more comfortable to use and adjust than the viewfinder on the Sony FS7 (of course it's thousands of dollars more, so it should be!).

I will also note that when I picked up the camera, they offered me the choice of PL mount (with some lenses) or EF. I chose EF, as I didn't want to be distracted by the sexiness of lovely lenses on this camera. I like to see a camera at its worst (or close to it). I want to see it without enough light, without enough support, without sexy lenses. Takahiro Mitsui (lead Engineer for the Varicam35) very quickly replaced the PL mount with the EF mount. That was extremely exciting to see. It leaves the sensor exposed, so I wouldn't do it out in the field, but you absolutely could. An Allen key and a couple minutes was all it took. Smart, Panasonic. Very smart.

Image
The morning after shooting, I brought the camera back to Panasonic. The extremely talented and kind Takahiro took me into Panasonic's 4k projection room and we played with the footage. Seeing it up on a big screen was more exciting than I expected. It looked great. Takahiro pushed and pulled the footage and I never saw it fall apart. We never did anything extreme, but it held up well to everything he tried.

Color
The first thing that stood out was how much healthy color there was in these dark shots. Looking up into trees and the various colored lights of Los Feliz revealed a ton of color information. Night footage can get very muddy very quickly, but this all held together wonderfully.

Noise
It is worth mentioning that I am not very strict about noise. I don't want a ton, obviously, but working with Sony's slog, I have learned that my noise threshold is higher than most. I don't mind if there's some noise in shots, particularly at night. Perhaps it's because I was trained up on film and grain was simply a part of night shooting, but I don't tend to demand 100% clean images. That said, the type of noise makes a difference. The Varicam LT has a bit noise at 5000, but it's not typical. It's small and tight and, as we all say when a nice new camera comes out, it even reminded me of film.

Now, Takahiro pointed out something to me that I simply lack the technical knowledge to explain. He explained to me the difference between sensor noise and image noise. He pointed to some shots where there was absolutely no noise in the blacks, but it would then appear in the Los Angeles night sky. The implication was that this is an inescapable aspect of shooting at night. He explained it to me more than once, but Mr. Mitsui is far more technically advanced than I am, so I won't try to summarize it. Rest assured that he said some very smart things that I will leave it to others to explore and explain.

My personal test for noise is not very advanced. I basically need to take the footage home and see how it responds to a basic noise reduction. I am not a colorist. I do basic color work for some of the jobs I shoot, but I am not a colorist. I have a Neat Video plugin (which I love dearly) for Adobe Premiere and I do my work with that. Sometimes shots suffer from that "plastic-y" look after noise reduction. Sometimes they do not. This is important to me- How does the image react to a basic de-noising pass?

I am currently coloring a TV show I shot last summer. We shot on the Sony FS7 (RAW with the Odyssey 7Q+ converting to ProRes) with some scenes being shot on the Sony A7s (also recording 4k ProRes with the Odyssey 7Q+). I love what Sony is doing and how far they're pushing the envelope. That said, I am noticing a real difference coloring and de-noising the FS7 vs the Varicam LT. The Varicam is holding up much better so far. That said, these are things that were shot completely differently and are perhaps unfair to compare.

- The best example of a shot that I was tempted to de-noise, but didn't: 2:13-2:26.
This shot for me exemplifies that line between what some might find aesthetically pleasing noise (me) and others might call too noisy. Obviously this is subjective, but I wanted to leave it untouched so you could see how the noise plays in close ups.

Final Thoughts
I'm not going to give too much of a summary here, other than to say I'm very, very happy to have Panasonic back in the fold. The DVX100 & HVX200 were big cameras in my life and it's great to have Panny back on the map. The Varicam LT firmly places Panasonic in the conversation when choosing a camera for any job.

The current advancements in camera tech are mind-boggling. Panasonic's dual ISO feature is one of the most exciting features to me on the market and really gives me perspective. I am so lucky and grateful to be around at a time when the toys are this good. The difference between the top-tier cameras (Alexa/Red Weapon/Varicam) and the bottom (iPhone) is significant, but it's not that significant. How amazing is that? We all carry a tiny device in our pockets that is capable of shooting a feature film. 12 year old of me would kill to live in this world.

A very sincere thank you to Panasonic for letting me play.

The future is bright (with dual ISO).
- Andy